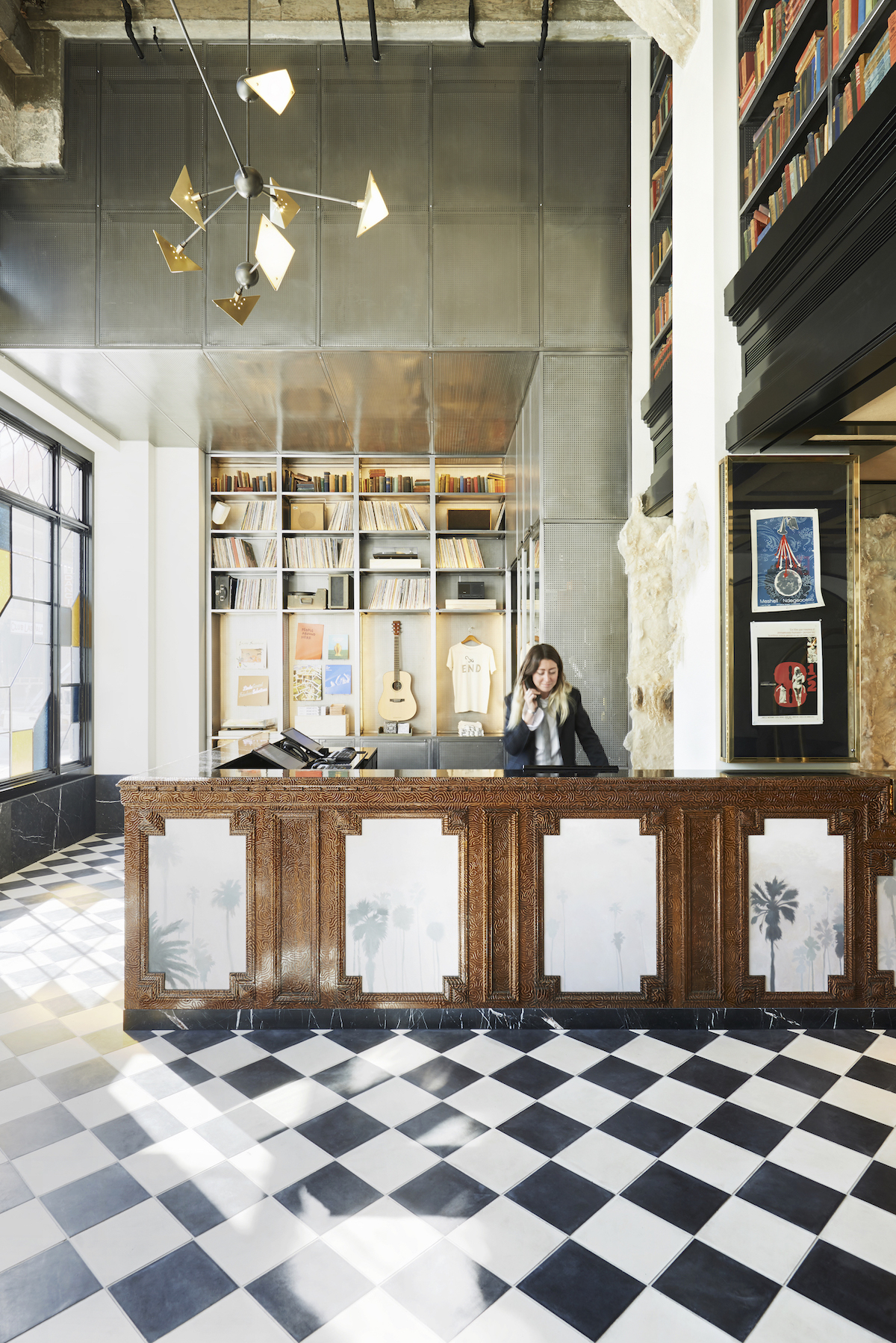 You are a seasoned traveler who enjoys being immersed in culture, art and design. You like melting-pots and being surrounded by an hotel clintele that is a unique mix of hipsters, high-end frequent flyers and sophisticated influencers. You gravitate towards comfort mixed with entertainment and prefer hotel staff with a laid-back attitude.  If you sympathize with these qualities, then nothing beats Ace Hotel Downtown Los Angeles.

Plugged in the city’s most engaged and creative art district, Ace Hotel Downtown Los Angeles is a fascinating combo between 1920’s Hollywood glamour and modern minimalism.

The most vibrant Los Angeles hotel was built in 1927 in what used to be the historic United Artists building in Downtown LA,  preserving all the charm you were longing for in a city that seems to have a hard time mixing historical legacy and modernism. Charm hits you all the way as you step into the lobby being greeted by some of the coolest/laid-back hotel staff in the world. You are instantly captured by avant guard details infused in old Hollywood vibes, the ones inspired by United Artist’s co-founder and darling of the silent era – Mary Pickford. A pioneer for all actors turned independent producers, Mary Pickford in the ’20’s left Paramount Pictures to pursue her dream, joined by D.W. Griffith, Charlie Chaplin and Douglas Fairbanks. They turned to architect C. Howard Crane to build the spectacular United Artists Theatre, still intact and in full operation, adjacent to the hotel, and the magnificent tower, which first served as offices for Texaco. The Presidential Suite at Ace Hotel

Commune Design did a wonderful job to breathe life back into the historic site and capturing the luxury and elegance of the movie palaces built in the 1920s and 30s with a design aesthetic that mixes uncluttered comfort with a bohemian vibe.
The public spaces in the hotel tower are intimate in scale, flowing naturally from one room to the next — a seamless transition from registration, elevator vestibule, coffee bar, restaurant and into the mezzanine lounge. The result is a singular experience, a collection of architectural and design references piled on top of one another. Viennese cafes, Mission-style churches, Luis Barragan, Parisian modernism, the Bauhaus, Piet Mondrian, and Adolf Loos share space with each other. For the guest rooms, Commune Design drew inspiration from Rudolf Schindler’s residence in West Hollywood. Original concrete ceilings were maintained. The furniture in the rooms is made of dark grey-tinted medium density fiberboard. The bathrooms, equipped with unlacquered brass fixtures, are separated from sleep and living spaces with steel and glass windows. Guest rooms feature custom Ace x Revo Radios, Noguchi lamps and Pendleton blankets woven in a Mondrianesque pattern complete the space. Select rooms include C.F. Martin & Co. guitars and Ace x Rega RP1 turntables.
The Ace Hotel brand is the brainchild of Seattle friends Alex Calderwood, Wade Weigel and Doug Herrick. Their vision: take a seasoned traveler and immerse him in the local scene. Their approach: the unorthodox way. Their belief: stay true to your core and create with soul. Ace Hotel Seattle opened in 1999. The second Ace opened in Portland in 2007,  Ace Hotel New York and Ace Hotel & Swim Club  in Palm Springs, California both opened in 2009. At Best Girl restaurant, chef Michael Cimarusti will delight you with sustainable seafood and sexy re-interpretations of Mediterranean bites

Ace’s family doubled in size over 2013 — in addition to Downtown Los Angeles, they opened a property in London. Ace Hotel Downtown Los Angeles captures you in an entertaining vortex from the gorgeous rooftop bar and pool, perfect to dance the night out, up to their delicious restaurant bistro, Best Girl. Named after the first film screened at The Theater in 1927, Best Girl is a delight to the senses. Championing sustainable seafood and sexy re-interpretations of Mediterranean cuisine, chef Michael Cimarusti does a great job in pleasing your palate with sustainable, wild caught fish, prime cuts and grab-and-go dishes.