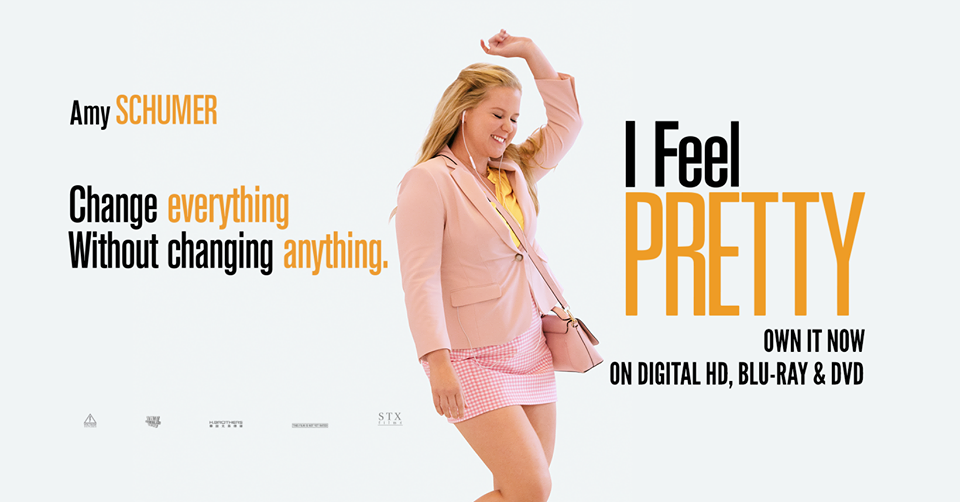 The heart and soul of I Feel Pretty is the bond Schumer’s Renee has with her long-time best friends Jan (Busy Phillips of Cougar Town and Vice Principals) and Vivian (SNL’s Aidy Bryant, in her follow-up to last year’s The Big Sick).

Marking the directing debut from popular writing team Abby Kohn and Marc Silverstein (co-writers on Never Been Kissed, He’s Just Not That Into You, and How to Be Single), I Feel Pretty speaks a sometimes brutal truth about how women’s self-esteems are chipped away systematically on a daily basis by the world at large. But using humor, it also delivers a message about empowering oneself and not giving a toss what the world thinks about you. On top of that, it’s also a sweet love story and a tale of a woman who infiltrates a high-end makeup company and gets them to more effectively market their products to all women.

I Feel Pretty is a PG-13 movie. You’d want teenage girls to gain sensibility on certain body and self-esteem issues, and was this always the goal?

Amy: No, no, it was always going to be PG-13, but for me, I was like, “Can I be in this? Oh yeah, it’s not necessary for this to be R rated.” We were definitely make a movie that we would have wanted to see at that age. But that’s really funny that you didn’t know going in. I wonder at what point you realized.

Were there older movies that you looked at that delivered messages that you thought, “This one did it right,” and maybe modeled I Feel Pretty on?

Amy: That’s a good question. The people who wrote it, Marc and Abby, talked about being inspired by the movie Big. There weren’t any for me that helped fuel my performance, because I can’t be living this [view of myself] as something that’s magic. This is just my reality now. I don’t know what movies this felt like to me or what I might have been inspired by.

Did you make any adjustments to the screenplay once you got it? Was this written for you?

Amy: I don’t think it was written for me, but yes, they were really cool about being collaborative.

What sorts of changes did you make?

Amy: The bikini contest scene was written so that it was just me posing there in a bikini, and I changed it to that whole thing [laughs]. Basically, anything that was written at like a 3, I said, “Yeah, this is going to be an 11.” There was a lot. I added in me standing in front of the mirror and taking myself in, being disappointed. I wanted that to be really alive because it was important to me that—and this was part of the backlash that came from the trailer—people knew that this wasn’t a movie about an ogre becoming a princess. This is about a person who really struggles with self-esteem and feels invisible and learning where her worth is actually coming from. So it was flattering, the backlash of “You’ve not vile enough!” Some of the writing was like “She’s not a Hollywood star, but she’s not THAT bad.” I was like, “Thanks, guys!”

And these are attitudes that you tackled on your TV series at times.

Amy: Right, like people deciding if I’m hot enough to live. But it really wasn’t about that. It was about the fact that everybody has these insecurities and feels invisible. It’s a really process to figure out what makes you feel good and what actually makes you you, so that you can go out and feel good about yourself. About the backlash, when people see the movie, they’ll realize that’s not what it’s about.

What do you want people thinking about when they leave the movie?

Amy: I want people to feel great. There are those handful of movie that you see over the years that when you leave, you’re just like “Yes!” I really want that feeling and I want it to be sustainable and have people realize it. The next time people have a moment when someone says something to them, I want them to go “No.” I want them to be equipped to brush those moments off and say, “Your experience of me is not my reality.” And it’s not about the way I look; it’s about the energy I’m carrying. You can feel that, when someone walks in a room, it doesn’t matter if they’re the most beautiful person you’ve ever seen, you can see that they wish they could just hide.