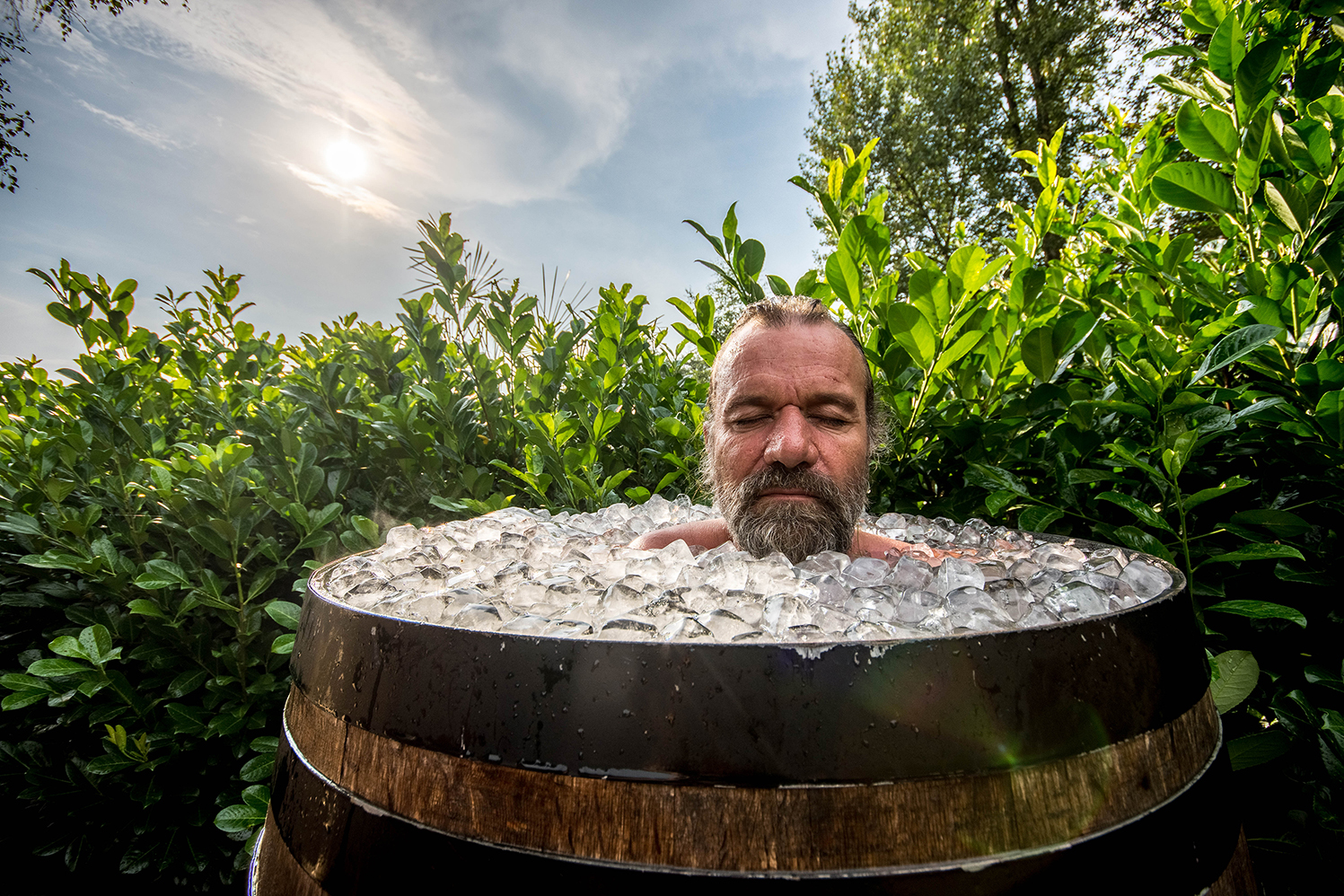 How Wim Hof Became the World’s Most Famous Breathworker

By LuluMaggio 9, 2018Ottobre 23rd, 2021No Comments
Wim Hof is the Dutch daredevil known for being an ambassador of the cold and the planet’s most famous breath worker.
To this day, he holds 26 world records. He climbed Mt. Kilimanjaro in his swimmers in less then 2 days,  swam long distances under polar ice and endured being up to his neck in a cylinder filled with ice cubes for over 90 minutes.
His countless endeavors gained him worldwide fame and his nickname: The Iceman.
The US channel Vice.com  has released a documentary based on Hof’s fascinating story.

Wim has also appeared on a number of podcasts such as The Joe Rogan Experience, the Tim Ferriss Show and Dave Asprey’s Bulletproof Radio.  He has taught onstage at Tony Robbin’s Unleash the Power Within live events and has attracted a huge list of celebrity followers/students such as pro-surfer Laird Hamilton, actors Jim Carrey and Jason Statham, and multi Grammy winner/music producer, Rick Rubin.

Besides his record breaking endeavors, Wim is internationally renowned for having designed a Scientifically-Proven Formula to consciously control your immune system, one breath at the time. The Wim Hof method it’s a powerful technique using gradual exposure to the cold and oxygen breathing to tap into your reptilian brain, releasing your own adrenaline at will.
I had the immense pleasure of meeting Wim in 2016 in Los Angeles, during an interview done in collaboration with Shiva Baum for LA Yoga Magazine.
Shiva and I had both been gravitating in the American spiritual community for years, and came across teachers and gurus of all sorts. After sitting with Wim for a couple of hours,  we both felt immensely blessed and mesmerized by Wim’s wisdom, delivered in such a humble, down-to-earth, ‘no-preaching-allowed’ fashion.
I became so fascinated with his persona and teachings that a few months later I eventually joined him for a week-long extreme expedition in the Pyrenees. Wim’s journey with the healing powers of the cold and the breath-work started after the loss of his wife in 1995, which left him as a single dad raising four children in Amsterdam.
He told us, “This is a possible technique for those who suffer from not being able to activate feel-good hormones in the case of trauma, derailed brain activity, or grief. This is a way to bring them back to a sense of control and to feel relief instead of terror. So, the real terrorist that we are tackling is to be out of control in the mind.”
At a certain moment he felt attracted by intuition and instinct to go into cold water. “I know languages of yoga”, he said, “I know esoteric disciplines, but nothing beats THE COLD…The cold is merciless but righteous. It’s your warm friend I call it because it brings back THE HEART.” Wim said that we all have have an enormous potential to adapt, “but we lost this connection with the deeper parts of the brain (the limbic system), and thus we’ve become conditioned by the neocortex to the modern way of thinking. We make beautiful houses with air conditioning and heating and we go from A to B with cars and all that. The deeper parts of the brain are needed to be stimulated, the ones that affect the endocrine system, which is the hormonal system.”

In America, the biggest killer is cardiovascular conditions. “Gradual exposure to cold water optimizes the vascular system, over 70,000 miles of vascular channels. The muscular tension of the vessels is optimized through gradual cold exposure. They are optimized within 10 days of gradual cold exposure. I teach people to be able to withstand ice water in an afternoon, regardless of age and regardless of their condition.” No more trouble with the cold: here, in the Pyrenees with Wim, July 2017

Right now he especially sees his new challenge in passing on his method to others to give everyone the opportunity to reach out and do more than what they thought they were capable of. Through the right training and exercises, you can strengthen your inner nature and prevent disease.

“I am one of a pair of identical twins. My parents never expected a second child. So, I was still in the womb almost too late. I came out after my mother, who was a very strong woman, prayed for a Cesarean. Just before entering into the operating room, I was born in this cold hall. I was born then like it was nothing, but with this psychic imprint.”

There is plenty of scientifically evidence about the efficacy of the Wim Hof Method. How to endure the cold: here, training with Wim in the Pyrenees, July 2017

One of the most mind-blowing studies was published in 2014 in the Proceedings of the National Academy of Sciences that corroborated both Wim’s ability to consciously regulate his immune system response at will.  During one specific experiment in the Netherlands, a group of 24 participants was exposed to a bacterial toxin, produced by Escherichia coli (commonly known as E coli). When Wim was exposed to the bacterial toxins, he experienced fewer symptoms of the inflammatory immune system response. Then the 24 volunteers entered the study: 12 in the control group and 12 recruits trained by Wim Hof in his method.

Upon exposure to the bacterial toxin, the Method-trained volunteers demonstrated measurably lower markers of inflammation (and even increased levels of the inflammation-lowering protein interleukin-10). The researchers noted higher levels of adrenalin in volunteers after utilizing the breathing techniques. While these are still preliminary results, they affirm what Wim insists. His methods can be taught and they have the ability to modulate our physiology.

To learn more about The Wim Hof Method:

Here is a short video for an introduction in the method.

The latest video is nice to see aswell.

For more information about the Wim Hof Method, watch demonstrations on his website (wimhofmethod.com) and on YouTube.

Online courses in the method and an app are available. Wim Hof’s workshop schedule is also found online.